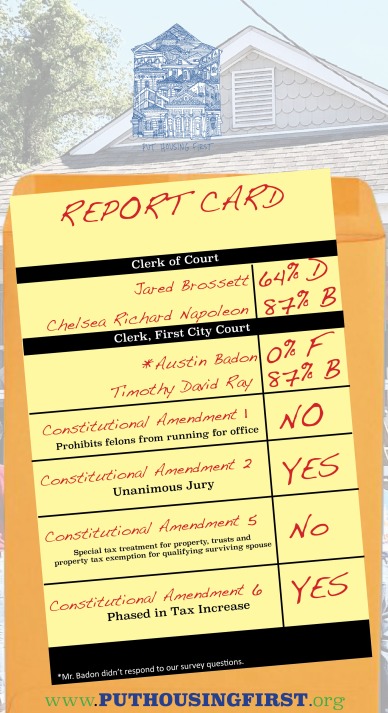 NEW ORLEANS – Leading up to the Nov. 6 election, the Greater New Orleans Housing Alliance (GNOHA) once again conducted an in-depth interview process with candidates to score them on their commitment to ‘Put Housing First’ and support affordable housing policies in office. The group launched its Put Housing First campaign leading up to the 2017 election cycle in the hopes of securing 80,000 registered voters over the next few years to support advocacy efforts and hold elected officials accountable in prioritizing safe, affordable, healthy housing for all in New Orleans.

On Thursday, Oct. 4, upcoming election candidates received a survey including a series of questions regarding critical affordable housing policy proposals, such as the National Housing Trust Fund, eviction, and title clearing issues, with responses due back to GNOHA by Friday, Oct. 12. Throughout the week of Oct. 14 – 21, responsive candidates were asked to participate in an in-depth interview to discuss their survey answers, and further explain their positions on the items listed in the Put Housing First platform.

Of the 14 surveys that were distributed to candidates, GNOHA met with three of the candidates listed below. Those candidates who were unable to meet in-person to discuss their answers were disqualified from receiving anything above a “C” letter grade. Average results per race were as follows:

*Candidates who did not respond received 0% (F)

To view the full 2018 candidate scorecards, including questions and responses, click here.

The group will continue to challenge candidates to acknowledge the affordable housing crisis at a pre-election march on Saturday, Nov. 3 beginning at 10:30 a.m. in Armstrong Park. For more information on the Put Housing First March, click here.

View all posts by puthousingfirstgnoha